By lisaneal on September 16, 2008 in Uncategorized 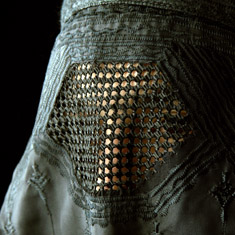 The Dutch Education Minister, Ronald Plasterk, wrote in a letter to Parliament that the wearing of face-covering clothing was incompatible with the education process because of the importance of non-verbal communication” and that the ban should extend to students, teachers, and school visitors. A Dutch government website said that “good education depends on teachers and students being able to see each other. If one of them wears a face-covering garment, good communications become impossible.”
Plasterk is a former professor of molecular microbiology at the Vrije Universiteit in Amsterdam, where my friend, Frances Brazier, is a computer science professor. I called her to ask her what she thought about the proposed ban. Frances said that as a university professor, Plasterk was clearly used to looking at faces. In Frances’ experience, even in a large lecture hall, she looks at her students and gauges their comprehension based on their reactions. Facial expressions are part of what make teaching a dialog between Frances and her students. She went on to point out that The Netherlands is a densely populated country where even the Open Universiteit Nederland has many groups of students who meet in person.
Frances has taught online and prefers the classroom because she likes seeing her students’ faces instead of talking to a wall or camera. I have also taught online and, even with videoconferencing or photographs, I find that I miss the richness of face-to-face interaction. I believe it is possible to get to know students well without ever seeing them, as well as for students to get to know each other. Of course, some of this depends on which of the many types of e-learning is being used.
Certainly we are all becoming increasingly adept at online communication – and at taking online courses. Forgetting about attire, there are cultural and regional differences that impact communication. I find myself speculating about the differences between the attitudes in The Netherlands and in less densely populated or larger countries. While Frances said the furor has died down, issues about what constitutes good education and good communication will continue to surface.

By lisaneal on September 11, 2008 in Uncategorized

Yesterday’s Boston Globe reported that “the American electorate is taking a crash course in Sarah Palin,” John McCain’s running mate. Much of this, no surprise, is being conducted on the Internet.
Websites, blogs, tweets—everyone seems to have something to say or something they want to find out about. The obvious difficulty is determining what is true and what is fabricated, exaggerated, or taken out of context. But isn’t that part of the point of teaching—to distill knowledge?
Here’s my advice, Sen. McCain, not that you asked: develop an online course that presents the information everyone is seeking in a concise and inviting format. Inviting here means lots of pictures—Gov. Palin seems to be on the cover of every magazine this week. Include audio and video clips too. And make sure you answer the questions on everyone’s mind—and if you aren’t sure what they are, start with the 21,476 questions posed (and answered!) about Palin on Yahoo Answers.
Of course, there’s the other meaning of crash course. An example is in a Star Trek episode when “the Enterprise encounters what they think is a large asteroid on a crash course to a populated planet”. The asteroid is actually a ship filled with people who whose “thoughts are monitored by an unknown source and cause them pain if they think of any forbidden subjects.” I can think of some politicians who would like that!

Wandering Ants and the Destruction of Boundaries

By lisaneal on September 10, 2008 in Uncategorized

One of the most moving museum exhibits I ever saw was Yukinori Yanagi’s The World Flag Ant Farm, which consists of interconnecting boxes filled with sand in the pattern of national flags in which ants travel, transporting food and sand. The ant farms, on display a couple of years ago at the Tate Modern in London, were intriguing because of the increased realization, as one moved closer, of how they were made, aided by a description on the wall. Those wandering ants could be viewed as destroyers of boundaries, a metaphor I find appropriate for e-learning.
Online learning at its worst boxes a student in, if you will forgive the allusion, to a prescribed path. But more and more often I come across educational innovations that allow students to find their own path. While this happens readily in informal learning, it is heartening to see this more in formal learning as well. The use of technologies that lower the boundaries for content creation, for instance, allow students more room to create and participate themselves, instead of being constrained by what the teacher does. A teacher can also be like the description on the wall, offering an in-depth explanation when needed. And as a teacher myself, I thrive on the sparks of excitement from a student who has new ideas or who clearly understands and applies a new concept.